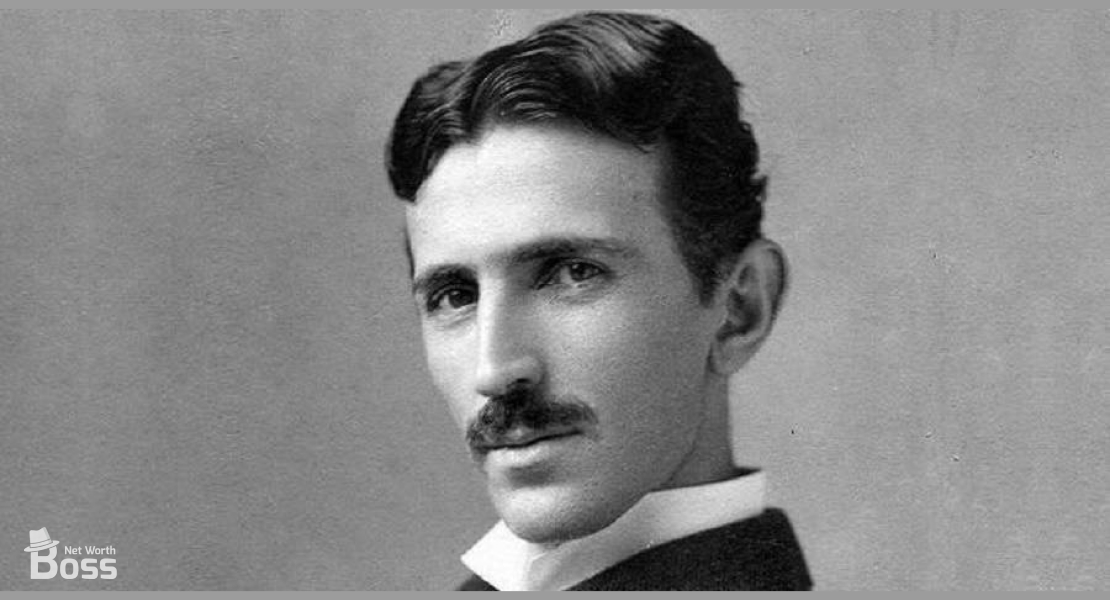 Nikola Tesla was a Serbian-American inventor, electrical engineer, mechanical engineer, futurist, and one of the greatest inventors of all time. The (AC) alternating current electricity supply system powers almost every device in our daily life from the light in our houses to the electric car we drive.

It is sad that Nicola Tesla died poor inside a hotel room, where he lived his last 10 years. After all the achievements he did to help humanity and make their lives easier, he died poor and alone.

Before his death on January 7, 1943, Nikola Tesla’s net worth was estimated to be around $0.

Nikola Tesla was born on 10 July 1856, in Smiljan, Austrian Empire (in present-day Croatia). He is the fourth of five children: three sisters, Milka, Angelina, and Marica, and an older brother named Dane, who died after falling from a horse.

Tesla attended primary school in Smiljan where he studied German, arithmetic, and religion. Then followed by the middle school In 1870. His mother was making home craft tools and mechanical appliances. This was an inspiration for Tesla and was one of the things that gave him an interest in innovation and electricity later on.

Tesla began gambling and quickly became addicted, he cut ties with his family so no one will find out about it.

In 1881, Nikola Tesla moved to Budapest, Hungary, to work under Tivadar Puskás at a telegraph company, the Budapest Telephone Exchange. He made many improvements to the Central Station equipment.

One year later, he started working for Thomas Edison company named Edison Company in Paris. Tesla’s advanced knowledge and skills in engineering and physics were noticed by the management and was sent to troubleshoot engineering problems at other Edison utilities.

The manager at Edison company offered Tesla a job in Edison Machine Works in New York City. Tesla and Nicola were impressed by each other. In the manufacture,  Tesla was working on troubleshooting installations and improving generators. After working on an arc lighting system project the two disagreed on many things and Tesla left the company.

After leaving the Edison company, the Two became rivals. Nicola Tesla believed that his (AC) system was better than the Edison (DC) system.

One year after quitting, he formed his own company named Tesla Electric Light & Manufacturing. The investors showed little interest in Tesla’s ideas for new types of alternating current motors and electrical transmission equipment. So they took the company and the patent that Tesla had.

In 1887, Tesla invented an induction motor that ran on an alternative current (AC). The came concept is used in the Tesla cars. This invention caught the attention of the Electrical Engineer George Westinghouse, who hired him as a consultant for $50,000 a month (after inflation adjustment) and the war of the current began.

Tesla helped Westinghouse to win the current war against Thomas Edison. After the fire that burned his lab, the radio patent that was given to Guglielmo Marconi and not him, and lack of finances Tesla abandoned his dream project The Tesla’s Tower which will help people exchange messages wirelessly.

Before his death on January 7, 1943, Nikola Tesla’s net worth was estimated to be around $0.

Nikola Tesla had never married, he was working all the time.

Nikola Tesla was a Serbian-American inventor, electrical engineer, mechanical engineer, futurist, and one of the greatest inventors of all time. Before his death on January 7, 1943, Nikola Tesla’s net worth was estimated to be around $0.

What Do You Think About Nikola Tesla’s Net Worth? Leave a Comment Below