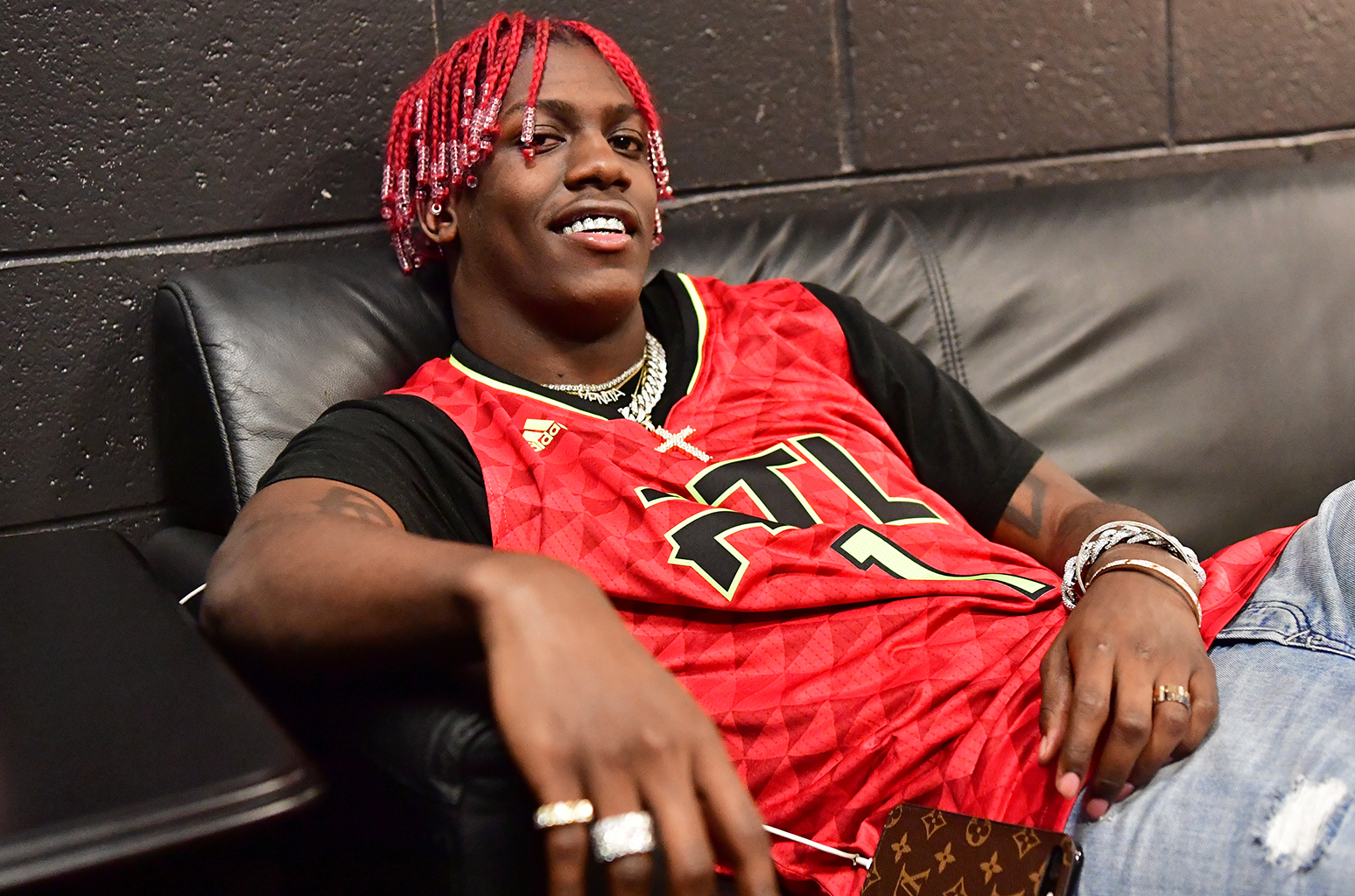 Miles Parks McCollum, Well known professionally as Lil Yachty is an American Rapper, Singer, Songwriter, and hip-hop recorder artist who has a net worth of $11 million. In 2015 he gained a lot of recognition when he released his debut EP Summer Songs ‘Minnesota’ and ‘One Night’.

After graduating from high school in 2015, Miles Adopted his stage name Lil Yachty and moved from Atlanta to New York City to achieve his dream to become a successful rapper. Lil Yachty’s voice is one of the best voices in the rap industry and that helped him a lot, Lil Yachty made his way up by networking and getting followers on Instagram.

Lil Yachty became well known after his features on the 2016 multi-platinum songs “Broccoli” and “ISpy”, for his hairstyle and personality. He has been nominated for a Grammy Award for his work on “Broccoli”.

Miles McCollum (Lil Yachty) was born in Mableton, Georgia on August 23, 1997. His father Shannon McCollum is a photographer, and his mother Venita McCollum was in the army and now she is one of his managers after leaving her job at pharmaceutical sales.

The young Yachty spent much of his time listening to rappers like Coldplay, Soulja Boy, Kanye West, Lil B., and the Canadian rapper Drake, which had a major influence on his musical career.

In New York, he lived with his friend and networked with online street fashion personalities, which helped build his name and look. At this time Lil Yachty was working hard to grow his Instagram following. During this time, Lil Yachty worked at McDonald’s to support himself.

After adopting his stage name “Lil Yachty”, he moved to the Big Apple in hopes of achieving his dreams. Yachty started to connect with online street fashion personalities and started building his Instagram following.

The hard work that Yachty did pay off, after the release of the SoundCloud version of his song ‘One night’ that was used in a viral comedy video, Yachty gained a lot of attention from people, and the music video on Youtube had over 19 million views.

2016 was a big year for Yachty, he debuted as a model in Kanye West’s Yeezy Season 3 fashion line at Madison Square Garden. Then he released his mixtape “Lil Boat: in March. In April of the same year, Yachty collaborated with DRAM on the hit song “Broccoli”, The sound became successful and peaked at number 5 on the Billboard Hot 100. Yachty featured on Chance the Rapper’s Coloring Book mixtape, released in May 2016.

Yachty announced on June 10 of the same year that he had signed a joint venture record deal with Quality Control Music, Capitol Records, and Motown Records, and he released his second mixtape Summer Songs 2 in July. Yachty appeared in XXL magazine as part of their 2016 Freshman Class because of his stylish appearance. Later that year Yachty was featured on the hip hop single “iSpy” by Kyle and also with Tee Grizzley in his song “From the D to the A”.

2017 was another successful year for Yachty, special for his image, he started it with the release of his debut studio album, Teenage Emotions that features guest appearances from Migos, Diplo, YG, and others. The album debuted at number five on the Billboard Top 200. Yachty was also featured in a remix of “With My Team” by Creek Boyz.

Later that year Yachty appeared in several high-profile promotional campaigns and starred alongside LeBron James in a Sprite commercial, he also appeared in the “It Takes Two” video with Carly Rae Jepsen for Target. Yachty was picked to be the face of the new Nautica and Urban Outfitters collection for the Spring 2017 season.

2018 made Yachty more famous than he actually is, he became a new member of the E-sports group FaZe Clan with the name “FaZe Boat”, in reference to his ‘Lil Boat’ nickname, and mixtape. Yachty also collaborated with Takeoff for future work and released his “Lil Boat 2” album featuring 2 Chainz, Quavo, Offset, and other big names. The album performed well and won place number two in the US Billboard 200. A couple of months later Yachty released his third album “ Nuthin’ 2 Prove” the album got place number twelve on the Billboard 200.

2019 wasn’t a big year for Yachty however, he teamed up with fellow Atlanta artists Lil Keed, Lil Gotit, and veteran producer Zaytoven in February for a collaborative mixtape, A-Team, and released his lead single for his next studio album, Lil Boat 3 with the title “Oprah’s Bank Account”, on March 9, features his childhood idol, Drake and DaBaby.

The Album landed number 14 on the US Billboard 200. The deluxe version of the album titled Lil Boat 3.5 was released on November 27. In April of the same year, Yachty released his new mixtape with the title “Michigan Boy Boat”.

2020 was the comeback for Yachty, he gained a lot of followers on TikTok, and he performed the theme song for the 2020 “revival of Saved by the Bell”, which was a remixed version of the theme from the original television series. In early 2021, Yachty prepared to produce and play the leading role in a live-action movie based on the UNO card game, and also set to feature in the “Pokémon” 25th-anniversary music album.

Lil Yachty one day said that the COVID-19 pandemic opened his eyes and made him know that having multiple sources of income and structures that make you money while you’re sleeping is a must.

Lil Yachty has many difficult times in his childhood, first is the bullying in high school, and second from the financial problems that he encounters in his life. He didn’t stop dropping out of the University and went to New York with only $100 in his name to pursue his dreams.

3. Rejections are the way to success

Lil Yachty said that he got rejected many times and he got discouraged a lot, but he never let that stop him, always continue your work, and one day you will succeed.

4.Be tough with haters

A lot of haters don’t know why they hate you, but the thing that you should do is know that you are better than them, so don’t let them poison your mind.

Lil Yachty is a single man, he was previously romantically linked with Megan Denise in 2017. Currently, he is focusing on his career rather than making love relationships.

Yachty’s mother Venita McCollum was so supportive, he said that when he started if something went wrong he would count on her. In Christmas 2016 Yachty Both his mom many gifts like “Birkin Bag, Chanel Bag, Céline Bag, Chanel Runners, Hermes Hats, Blankets, & Bracelets, Louis Hats& Scarfs, Chanel Polos, Gucci Sweaters, Shirts, & Belts.” and a house, car and pay all her loans, and thank her for all the 19 years he worked hard to make sure his Christmas was the best.

Today Yachty’s mother is one of his managers now, she wrote a book titled “Raising A Rapper” where she explains a lot of things about her experience with Yachty and how she is helping him with his career.

In 2016 Yachty expressed support for Bernie Sanders in the 2016 presidential election in an interview for CNN for his work during the civil rights movement.

In 2015 Yachty and one other man were arrested at a mall in Palm Beach Gardens, Florida for credit card fraud, Yachty was released after posting a bail bond of $11,000, later on, his records were expunged.

Lil Yachty lives in his penthouse in Atlanta. He recently bought House Next To His Home Because He Didn’t Want Neighbors, rappers and celebrities often do this after they get richer and famous.

What is Lil Yachty’s net worth?

Lil Yachty’s net worth is estimated to be $11 Million.

Lil Yachty lives in his penthouse in Atlanta.

What is Lil Yachty’s most successful song?

Lil Yachty’s most successful song is One Night.

At 24 years old Lil Yachty has done many things and achieved many goals in his life, using his networking and social media skills made him one of the best American rappers out there.

2015 was his year of success, he adopted his name “Lil yachty” and dropped out of university and moved from Atlanta to New York City to achieve his dream to become a successful rapper. As of 2021, Lil Yachty’s net worth is around $11 million.

What do you think about Lil Yachty’s net worth? Leave a comment below.

Ben Shapiro Net Worth
Next post
Bo Burnham Net Worth